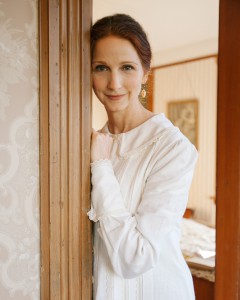 “Step into the parlour for tea and town gossip with the brilliant, witty, and enigmatic 19th century poet Emily Dickinson, The Belle of Amherst. This multi-award-winning one-woman play based on the reclusive genius’ writings and poetry features actor Renée Bucciarelli, whose work has enjoyed past praise from The New York Times.

The Roedde House Museum, a special piece of local history that was home to Vancouver’s first bookbinder, provided an ideal period setting for Emily Dickinson’s seemingly fathomless exploration of words, of a vibrantly-lived inner life, and of love. Audience members of this intimate performance found themselves transported back to an elegant time, with live piano music from Miss Dickinson’s own playbook, and tea served in china cups, offered with Emily Dickinson’s famous ‘black cake’.

Emily Dickinson has inspired countless plays, novels, children’s books, contemporary poems, dances, performances, and artworks, as well as over 1,600 musical compositions, a Simon & Garfunkel song and, more recently, a chart-topping rock album by Italian singer/supermodel (and former French First Lady) Carla Bruni-Sarkozy. Of Miss Dickinson’s boundless ability “to have made all things new” renown literary critic Harold Bloom has pronounced “The Myth”–as she was called in her time–an equal to Shakespeare.

“A poignant portrait of a self-confessed social maverick…The indefatigable Renée Bucciarelli will reward your assiduity with a compelling insight into the life of this recondite and mysterious woman.”— Review Vancouver

“A superb job of transforming this legendary literary figure into flesh and feeling. …Off-kilter and earnest…Bucciarelli owns her muse’s eccentricities with every restless motion.”–Daily Hive

Past performances in the Vancouver, British Columbia area include with City Stage New West, Presentation House Theatre, Christ Church Cathedral, Hycroft Manor, and as a benefit for P.A.L. Vancouver.  In New Hampshire: The Colonial Theatre (at the historic Mulburn Inn), the Tillotson Center, and as a special event in memory of local poet and artist Viola Sutton, benefiting the Great North Woods Arts Center. Special thanks to Deborah Wright Houston, Melissa Haller, and Sean Allan for contributions to direction.

“We must be careful what we say. No bird resumes its egg.” (Kyle Gherman photo) 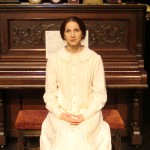 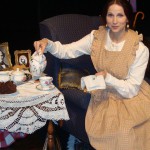 “The neighbors can’t figure me out…So, I give them something to talk about!” 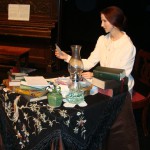 “I dwell in Possibility–”

*Renée Bucciarelli appears with the permission of Canadian Actors’ Equity Association. She is currently the Producing Artistic Director of City Stage New West, and Director/Developer of The Shakespeare Playground.